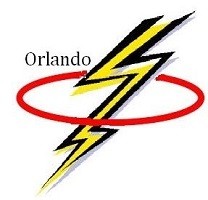 The Orlando Lightning opened the 2014 American Basketball Season with a resounding 102-62 victory over the Vero Beach Stampede played in front of a well attended home crowd in Winter Park, Florida.

International basketball veteran Barry Mestel's Lightning team had 7 players in double figure scoring, with Yves Sainto leading the way with 21 points.  Carlos Montilla supported the balanced scoring attack with 19 points and 5 assists.   The deeply talented Lightning squad was too much for the road team, who struggled with the Lightning's depth and overall talent level.  Like many of the ABL teams, the Lightning boast several high level European professionals, who in their FIBA off-season hiatus are playing in a professional basketball league that is rivaling any in talent outside the NBA.

Of particular note was the courtside presence of numerous influential individuals in the World of Basketball.  The NBA's Orlando Magic color commentator Richie Adubato watched courtside, as did Head Coach Dave Baker of the Dublin Ireland Swords Thunder basketball team.  Tony Lenard, a certified European Scout and President of Elite Sports Atlanta, was also present, making evaluations and scouting on behalf of several International club teams.  In only its first week of the 2014 season, the ABL already has displayed talent, which last season played professionally in such high level leagues as Spain and Argentina.

The Orlando Lightning are on the road this weekend as they travel to play the very talented Fort Lauderdale Sharks team at the Shark Tank in Fort Lauderdale, Florida.  Game time is scheduled for 7:00 p.m..